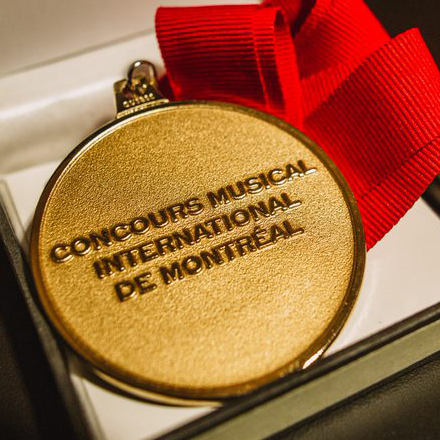 The Concours musical international de Montréal (CMIM) will give out a record amount in prizes and awards during its next piano edition, presented online, free of charge, from April 26 to May 14.

Never could such a sum be offered without the exceptional contribution of generous partners who support our mission.

Among the prizes and special awards, four newly added ones are featured below:

$75,000 – Solo recording on the Steinway & Sons record label and launch event at Steinway Hall in New York City
offered by Steinway & Sons
An exceptional calling card for our First Prize.

$15,000 – Normand Beauchamp winner’s concert tour in three North-American cities
offered by Sarah Beauchamp
A wonderful opportunity for our First Prize winner  to make his or her debut on new stages and lay the foundations for an international career.

$7,500 – Concerto performance with the CMIM’s official orchestra, the OSM
offered by the Orchestre symphonique de Montréal
A prize allowing us to applaud the grand winner of the Piano 2021 Edition on the Maison symphonique stage, once the current sanitary situation allows it.

$5,000 – Bita Cattelan Philanthropic Engagement Award
offered by Bita Cattelan
The CMIM innovates with the creation of this prize, the threefold objective of which is:

The Bita Cattelan Philanthropic Engagement Award recognizes a competitor who has demonstrated an outstanding commitment to community through volunteerism, involvement, or support of a charitable cause. A portion of the award will be donated to a cause or project presented by the competitor.

The CMIM salutes the work of the jury members of the Bita-Cattelan Philanthropic Engagement Award under the chairmanship of Jean-Pierre Primiani: Bita Cattelan, Nicolas Ellis, François Leclair and Andrew Wan.

See all the Prizes