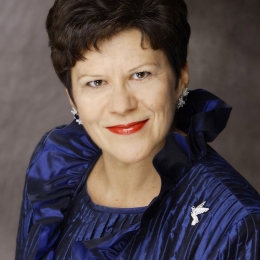 The name of Soile Isokoski, one of the most celebrated sopranos of Finland, originally implies the northern light which she now carries to the world in a most exceptional way. Second prize winner of the BBC Cardiff Singer of the World and First Prize winner of the International singing competition in Tokyo, she graduated from the Sibelius Academy in Helsinki and made her stage debut at the Finnish National Opera. From there she went on to capture audiences and critics worldwide. Working with the great conductors of our time (Seiji Ozawa, John Elliot Gardiner, Sir Colin Davis, Zubin Mehta, Daniel Barenboim, Bernhard Haitink, Claudio Abbado, Riccardo Muti, Valerij Gergiev, Pierre Boulez, Michael Tilson Thomas and many others) and a regular guest of the most renowned opera houses, she has given numerous concerts and recitals as well as made recordings. She earned special renown for such recordings as Strauss’ Four Last Songs under Marek Janowski (Gramophone Editor’s Choice Award 2002) as well as two Sibelius-CDs under the baton of Leif Segerstam: Luonnotar and Orchestral songs (MIDEM classical award; ’Vocal award’ and ’Disc of the year’ at the BBC Music Magazine 2007). In 2002, in honour of her notable contribution to Finnish music, Ms. Isokoski was awarded with the Pro-Finlandia medal. In 2007, she was awarded the Sibelius-Medal and was honoured with the title of Austrian Kammersängerin in 2008.

Since 2014 Soile Isokoski teaches singing at the Oulu University of Applied Sciences and from 2015 she is a guest professor at the Sibelius-Academy. She has given numerous master classes in Finland and abroad and served as a jury member at the BBC Cardiff Singer of the World and Mirjam Helin-International Singing Competition to name a few.