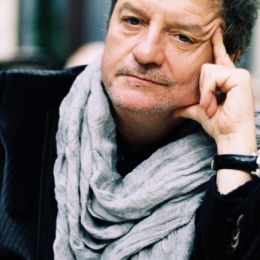 Pavel Vernikov, a student of David Oistrach and Semyon Snitkowsky, established his reputation as virtuoso violinist more than twenty years ago. Among other prizes he won the ARD International Violin Competition in Munich and the Grand Prix at the “Vittorio Gui” International Violin Competition in Florence. He has appeared at such prestigious venues as the Concertgebouw in Amsterdam, Carnegie Hall and the Kennedy Center in New York, Wigmore Hall in London, La Salle Gaveau in Paris, La Scala in Milan and Santa Cecilia in Rome.

For the last 30 years he has been a member of the Tchaikovsky Trio. His artistic partners have included Sviatoslav Richter, James Galway, Alain Meunier, Patrick Gallois, Maria Tipo, Natalia Gutman, Oleg Kagan, Yuri Bashmet, Elisso Virsaladze, Krystian Zimerman and Anthony Pay. He founded the Russian Academy of Higher Learning in Portogruaro and was Artistic Director of the Gubbio Summer Festival, the Dubrovnik Chamber Music Festival and the Eilat Chamber Music Festival.

Formerly a professor at the Conservatoire national supérieur musique et danse de Lyon, at present he is a professor at the famous Music and Arts University of the City of Vienna and at the Haute Ecole de Musique de Lausanne (Site de Sion). In 2013, he was appointed Artistic Director of the Sion Festival in Switzerland.

Pavel Vernikov has recorded for RCA, Ondine and Dynamic. He plays the beautiful Giovanni Battista Guadagnini violin, Milano 1751, owned by the family of Tibor Varga.