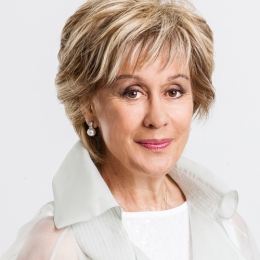 Kiri Te Kanawa was born in New Zealand, and carries the exotic blood of native Maori aristocracy. She gained legendary status almost overnight after her sensational debut as the Countess in Le Nozze di Figaro at the Royal Opera House, Covent Garden in 1971. From then, she moved rapidly into the front rank of international opera as one of the most famous sopranos in the world, mastering a large repertoire from the classics of opera to the art songs, and a great treasury of contemporary popular music. As a soloist at the wedding of HRH Prince Charles and Lady Diana, she faced one of the largest direct telecast audience (600 million) of any singer in history.

Dame Kiri Te Kanawa has performed in leading opera houses of the world – the Metropolitan, the Chicago Lyric Opera, Paris Opera, Sydney Opera House, the Vienna State, La Scala, San Francisco, and Munich – with the world’s major orchestral ensembles under the baton of the most renowned conductors. She has released a number of distinguished recordings including the complete Don Giovanni, Le Nozze di Figaro, Cosí fan Tutte, Die Zauberflöte and Tosca, as well as Mozart concert arias, the Strauss Four Last Songs, and the notably successful Songs of the Auvergne.

She was created a Dame Commander of the British Empire in 1982 and invested into the orders of Australia and New Zealand in 1990 and 1995 respectively. In 2011, she became Patron of the BBC Cardiff Singer of the World competition. She has received Lifetime Achievement Awards from the Classical “Brits” in 2010 and from Gramophone Magazine in 2017. She now devotes her time to teaching and mentoring the next generation of talented young singers.