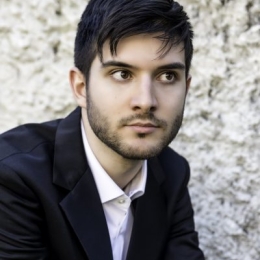 Biography 2017: Stefano Andreatta began to study music and piano at the age of seven with his father. He made his debut with orchestra at fifteen performing Beethoven First Piano Concerto. In 2011, he graduated with highest honors under the guidance of Francesco Bencivenga at the “Agostino Steffani” Conservatory in Castelfranco Veneto. In 2012 he was selected to take part in the Music Academy of the West in Santa Barbara, where he worked with Jerome Lowenthal, from Julliard School in New York. After which, he studied also with Riccardo Risaliti and Anna Kravchenko. In 2014 he completed with highest honors a Master in Piano Didactics, submitting a thesis on Russian composers of the Soviet Union.

Mr. Andreatta is currently studying under the guidance of Massimiliano Ferrati and is attending a post-graduate course at the Royal Danish Academy of Music in Copenhagen with Niklas Sivelov.