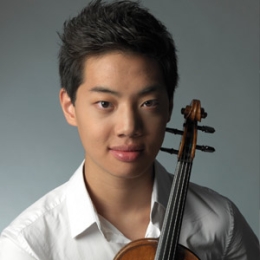 Biography 2019: If he weren’t a musician, Leonard Fu would be an astrophysicist. “In a way, both careers are not entirely different, both are stating the big questions in life,” he says. At 22, he already has a few impressive accomplishments on his resume. He has performed with the prestigious Elbphilhamronie of Hambourg, and was thoroughly impressed by its daring architecture. He has also performed at the Mariinsky Theater in Saint Petersburg and was invited by the Deutsche Kammerphilharmonie in Bremen to perform under the baton of Alexander Shelley. He was recently awarded the First Prize and Audience Prize at the TONALi Competition in Hamburg. He currently studies at the New England Conservatory with Donald Weilerstein. He is a fan of fellow violinist Isabelle Faust and is particularly enamored with her recording of the Concerto for violin by Schumann. In his time off, he likes to watch horror movies. His motto is: “Treat yourself like your own best friend.”

Janáček | Sonata for violin and piano