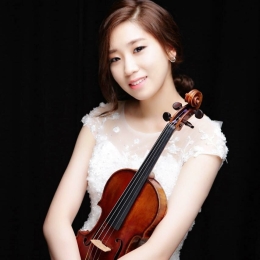 Biography 2019: A graduate of the prestigious Curtis Institute of Music, Christine Lim will soon begin a Master’s degree at the New England Conservatory. She will also join the Philadelphia Orchestra, which is a good thing since she particularly admires the style of its conductor, Yannick Nézet-Séguin. Also a great admirer of the American violinist of Turco-Armenian origin Ida Kavafian, who strongly influenced her, Christine is a firm believer in the virtues of hard work and perseverance. “Try hard, make it work” is her motto. If she wasn’t a musician, she would most-likely become a lawyer, and if she had to change instruments, her first pick would be the French horn. Having started violin at the early age of three, she has had the opportunity to perform in a multitude of competitions and festivals. She has performed several times at the Marlboro Music Festival and at Verbier. She also won the first prize at the International Kloster Schöntal Competition in Germany, and the second prize at the Tchaikovsky Junior Competition in Seoul, Korea. Christine will be performing on an Italian Gagliano violin made in 1776.