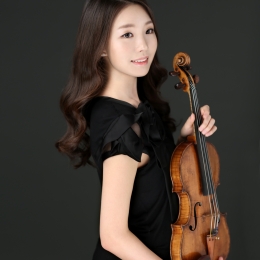 Biography 2019: Born in Seoul, South Korea, Jung Min Choi started showing immense musical talent from a very young age, which in time led her to win some of the most prestigious competitions in Korea, including the Ewha Kyung-Hyang Competition and the Music Chunchoo Competition. At age 12, she made her recital debut as part of the Kumho Art Hall Prodigy Series, and has continued to perform internationally in venues such as Merkin Hall, Verizon Hall, Field Concert Hall, Jordan Hall, and the Seoul Arts Center. In recent years, Jung Min won a special prize for the Best Performance of Commissioned Work at the 2015 Michael Hill International Violin Competition, and has been named a finalist at the Stulberg International String Competition and the Albert M. Greenfield Competition. As a graduate of the Curtis Institute of Music and the New England Conservatory, her former teachers have included Joseph Silverstein, Pamela Frank, Victor Danchenko, Yumi Scott and Miriam Fried. Jung Min is currently enrolled in the Artist Diploma program at The Cleveland Institute of Music as a student of Ilya Kaler.