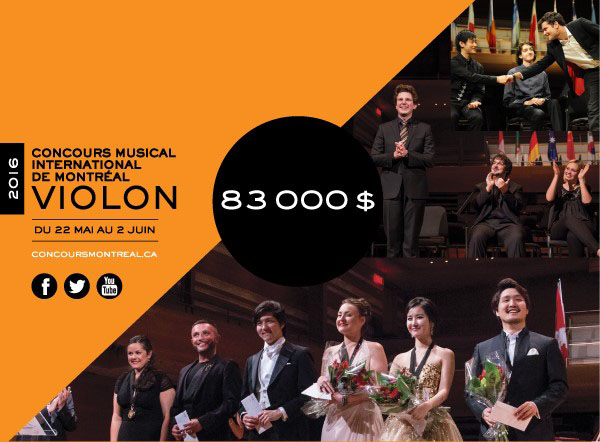 Candidates of the upcoming Concours musical international de Montréal (CMIM) have reason to rejoice! The CMIM is introducing three special prizes during the 2016 Violin edition, which brings the total prize money to $83,000!

A TRIBUTE TO ANDRÉ BACHAND

To pay tribute to their late father, Raymond and Jean-Claude Bachand will offer an award for the best performance of a compulsory Canadian work. André Bachand, after whom the prize is named, played an active role in the cultural milieu; his commitment and his talent for bringing people together allowed many cultural organisations to develop and survive financially.

Worth $4,000, the André-Bachand award will be introduced for the first time at the 2016 Violin edition and will be tied to an existing work from a Canadian composer that candidates will have to perform if they reach the Semi-Final Round. The chosen work will be announced on April15, 2016.

Tourisme Montréal renews its contribution to the CMIM by offering a $2,000 Award for the Best Performance of a Sonata in the Semi-Final Round of the Violin Competition. Twelve candidates must perform a complete sonata as part of the required programme for the semi-final recital, at the end of which the international jury will determine the winner of this award. The CMIM is very grateful for the continued support of Tourisme Montréal.

As part of the quarter-final required programme of the Violin edition, each candidate must play excerpts of a work by Johann Sebastian Bach. In order to reward the best performance of a work by this composer, the CMIM is delighted to form a new partnership with the Montreal Bach Festival, who will sponsor the Bach Award. This award includes a $1,000 cash prize as well as a recital during the Bach Festival.

In addition to these prizes, the CMIM has partnered with several national and international musical organisations to offer concert engagements to its prizewinners. In the coming months: