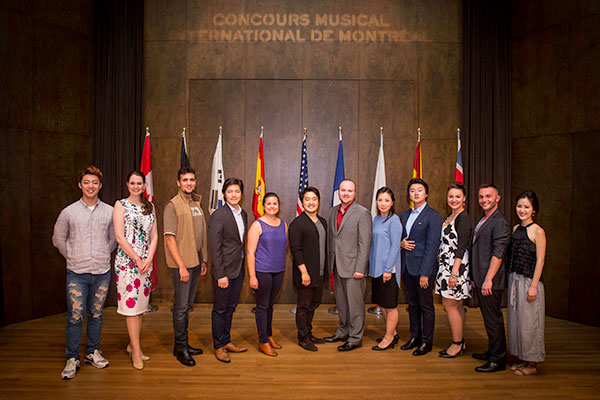 Three Canadians and five Koreans amongst the candidates selected

Montreal, May 27, 2015 — The Montreal International Musical Competition (MIMC) started on a lyrical note on Monday, May 25, as 24 young singers from nine countries were ready to take the stage at Bourgie Hall. Between May 25 and May 27, each competitor performed in a 25 to 30-minute recital, featuring the most beautiful pages of the repertoire. After a last-minute withdrawal, the international jury has selected 12 semi-finalists among 23 competitors

Starting tomorrow, the semi-finals and finals, as well as the Gala Concert and masterclasses, will be broadcast live on the MIMC website at http://concoursmontreal.ca/en/webcast

The six finalists will be announced following the last semi-final session on Saturday, May 30. They will perform with the Orchestre symphonique de Montréal conducted by Maestro Johannes Debus on June 2 and 3, at the Maison symphonique de Montréal. The announcement of the laureates will be made following the last final session on Wednesday, June 3.

The complete musical programme of each round is available at http://concoursmontreal.ca/en/thecompetitions/voice/candidates

Take advantage of the valuable teachings that two members of the international jury will impart on talented young singers: baritone Wolfgang Holzmair and conductor Richard Bonynge (at 2 p.m. and 7:30 p.m. respectively). Presented in Bourgie Hall, all masterclasses are free and open to the public.

Tickets and passports for the semi-final round are available at the Bourgie Hall box office: mbam.qc.ca | 514-285-2000, option 4